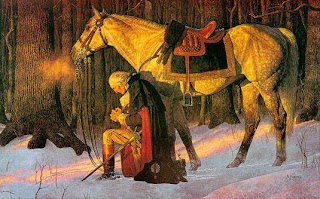 Isaiah warned people of the last days, “Woe unto them that call evil good, and good evil; that put darkness for light, and light for darkness; that put bitter for sweet, and sweet for bitter!” (Isa. 5:20). Why would he give this a warning if he did not know that such would be the case? On an almost daily basis I see where this is, indeed, the way of our world.

The following is an entry I wrote for my blog last year, and somehow I missed publishing it. So I'm going to share it with you now:

The other day I chatted with a neighbor who had recently moved to Kaysville from California. Somehow we got on the topic of the American history class her thirteen year old son attended in California. Her son, Eric, brought home a copy of the Declaration of Independence to study. My neighbor noticed how the word God and Creator had been replaced in the document with an ellipsis . . .  She went on to mention a painting that caught her attention hanging in the hall of Kaysville Jr. High when she went to register her son for school. It was the Arnold Freiberg painting of George Washington kneeling in prayer at Valley Forge. (It’s one of my favorite paintings). “You would never find such a painting in any of the schools in California,” she said. “They would consider that mixing church with state.”

We’re talking about history here, not trying to convert some teenage boy to Mormonism or Catholicism, as part of the curriculum. These things happened. They are part of our country’s history. The signers of the Declaration of Independence believed in God. Their belief and faith is what moved them to seek independence. And yes, George Washington prayed to God for help as he undertook the impossible—leading a rag-tag army of farmers against the greatest military power known to that date . To deny that these events happened as they did, or to alter a historical document because it offends someone, is no different that denying the Holocaust ever happened. History is history, whether we like it or not.

I dare say that the educator that censored the Declaration of Independence for those California students was probably in favor of same sex marriage or something equally as pernicous; a perfect example of those who would call evil good and good evil.

I’ve seen this paradigm in the world of YA writers. Last year I attended the SCBWI national conference in L.A. for my first time. Up to that point I had been naive, assuming if a book was written for children it would automatically be rated G or PG. Wrong! The buzz seemed to be that YA fiction needed to be realistic, and the real world of the adolescent right now was filled with sex, violence and filthy language. By being open and realistic with every intimate detail on such matters, we as writers were supposedly helping kids deal with life—it was a good thing. During that conference I wondered if I even had a chance at being a successful YA author if I didn’t have an absolutely horrible high school experience and I didn’t lace my manuscript with filthy language and sex.

Fortunately, an agent from the Andrea Brown Agency reassured me that, even though sex was selling, there still was a market for good, clean YA. She, for one, did not care for the smut. I didn’t end up hooking up with that agent, but I did come away from the conference with an increased desire to write and publish well-written, entertaining, uplifting literature for kids.

I know that’s what the Lord wants me to do, and I know He has helped me thus far with my writing. If any of you other YA/middle grade writers have felt a similar passion, urge, calling—whatever you want to name it—to write uplifting literature, I think it is your duty to follow it. We need to make sure that there are just as many wholesome books out there for kids to read as there is unwholesome ones. And if the world wants to make fun of our books, saying they are not what kids need or want, but their smut is, we’ll just remember Isaiah 5:20, keep writing, and give kids a choice.
Posted by Carolyn Twede Frank at 5:44 PM