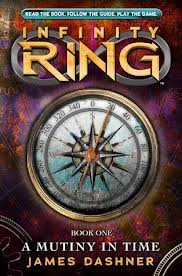 I'm giving away a print copy of  A Mutiny in Time, the first in the Infinity Ring series. I picked up a copy of the book at a recent Sci-fi/fantasy conference to give away on my blog. I was also anxious to delve into this new series in which Scholastic had invested so much hype, money, and time. I found the concept behind the series fascinating. Scholastic had gathered together six of their top children's fantasy writers and assigned each author a different book to write within the series. Each book was centered around a different break in time that needed to be fixed, and would also to provide clues to help the kids play a companion video game. I was especially interested in the success of this series because I know three of the six authors personally: James Dashner, Matthew Kirby, and Jennifer Neilsen--all local authors.

Unfortunately, I found A Mutiny in Time boring. I've read numerous of Dashner's books and found them all engaging, pulling me in at the very beginning. I kept reading, wondering when the story would kick into gear. I was almost to the half-way mark before the kids actually used the infinity ring and went back in time. Because my reading time is so limited, and I have some major research I'm doing for the second book in my Literary Loom series, I opted out of finishing the book. Perhaps if I would have stuck with it, I would have ended up enjoying it. But I figure that if a book can't engage me before half-way through, I've got better things to do than to finish it.

I kept asking myself, "Where was Dashner's flair?" As exciting as this concept is--that of multi-author series--perhaps it works better on paper than in real life. One of the authors, Matt Kirby, is in my critique group. I remember him mentioning while he was working on his book in this series, that it wasn't his funnest novel to write.He had to suppress his normal style and try to conform to a generic style that all of the authors were to use so as to make the series consistent. Perhaps that is what Dashner did  in A Mutiny in Time.

What happens when you strip away an author's personality in their writing? My guess is you get a boring book. I think the concept of a multi-author series is awesome. I just think there needs to be someway to connect all of the author's books while maintaining each individual writer's flair.

That said, I'm still giving away a copy of A Mutiny in Time, by James Dashner. It's so easy to enter to win. All you have to do is follow my blog and leave a comment. You can enter between today and next Tuesday, March 19. March 20 I will announce the winner on this blog. (I will mail it for free within the continental US. If you live outside that area, you will be responsible for paying the shipping fee if you want the book).