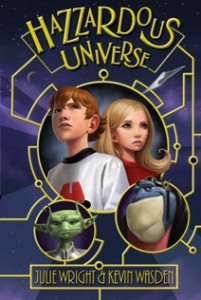 Author Julie Wright has ventured into the relms of Middle Grade science fiction with her new novel, Hazzardous Universe. In her story, 14 year old Hap Hazzard (loved the name), and a neighbor girl, Tara, are abducted by aliens by mistake. Hap's grandfather has always talked about aliens in the past but everyone, including Hap had never believed him--until now. Hap and Tara are whisked away from earth on a pizza-slice shaped space ship.(Fun concept for kids). They encounter a host of imaginative creatures and characters as their captors smuggle an all-powerful crystal away from earth. Hap steps in to try and thwart the crystal from falling into the wrong hands, but ends up facilitating the proccess instead.

As a person who writes MG books, and often reads and enjoys them, I found this particular book read a lot younger than the actual age of the protaganist. First, the story question felt weak and very juvenile to me, (the thing that the protaganist wants more than anything). Hap, more than anything, wants to get home to his family. This felt weakened even further when at the end of the book, Hap too easily tosses this desire to the background and decides to venture off into the unknown universe with his accidental captors. Second, I found the tension in the story weak and often contrived. But with an intended audience of young children, I'm sure this was by the author's design. Though Harry Potter was written for children, (and read by a lot of adults like me), some parents found numerous scenes too intense for young children. This was obviously avoided in Hazzardous Universe. It reads squeeky clean and harmless.

In conclusion, I would easily recommend Hazzardous Universe to young readers (10-13), especially if they are fans of science fiction. But to those adult readers out there who want realistic action and riviting suspense, I suggest you stay in the adult literature section to make your choice.

Keep checking my blog. I will be giving away a copy of Hazzardous Universe as part of my April blog contest. And don't forget to comment on March's contest post. There is still plenty of time to leave a comment and have a chance to win some free puppets. Yes, that's how easy it is, just leave a comment.
Posted by Carolyn Twede Frank at 7:20 AM