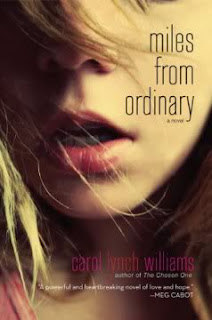 Thirteen-year-old Lacey wakes to a beautiful summer morning excited to begin her new job at the library, just as her mother is set to start  her first day of work at the lockal grocery store. This is where the ordinary elements of this story end. Carol Lynch Williams pulls the reader into the head of her young protaganist as no other author can. She builds a scary, uncertain world, not one of science-fiction or fantasy, but of  everyday life through the eyes of a girl living with a severly depressed mother.

The book started out a little slow for me. This was probably due to the fact that Williams had to set the stage for her drama, just as science-fiction writers have to dedicate pages to world building because their story takes place in a setting unfamiliar to the reader. Also, it could be that the entire book takes place during the time period of only one day. The fact that she began her story with a dream and peppered the entire novel with flashbacks held me back from liking the story as much as I had enjoyed her first novel, The Chosen One. But the more I read, the more I was rewarded with a story that kept me on the edge of my seat and made me want to bite my fingernails down to the quick--even though I'm not a nail biter.

I did like the ending of Miles From Ordinary more than the Chosen One, as it gave me a closure that worked for me.

I realize that this book may not be for everyone, as it is quite dark in places and deals with subject matter to which some people may not want to expose their kids . But having grown up in a family that is racked with depression, I found it realistic and my heart ached the more for young Lacey--an innocent victim of the poorly understood disease of depression.
Posted by Carolyn Twede Frank at 11:57 AM