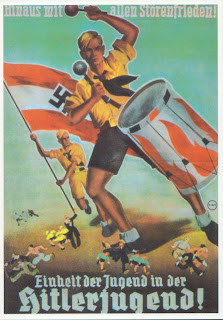 I finally got that long awaited phone call that all authors look forward to from the day they pen that first page of their novel. A publisher called me and said they wanted to publish my book. Covenant Communications has offered me a contract for my novel I Cannot Serve Hitler (working title). The book is a work of fiction, but it is based closely on the life of an actual LDS boy who was forced to be a Hitler Youth and fight in the German army at age sixteen.

I'm really excited about the prospects of this work finally becoming available for people to read. I've been working on it for over two years now. So then why did I not feel like jumping for joy after I hung up from that phone call--like I have envisioned for the past six years? (That's how long I have been writing seriously).

Timing. I had to hurry and cut the phone call short because I had to take my daughter to a doctor's appointment, so I didn't get to savor the call. On top of that, I've got my first novel coming out in a month. I made the decision to self-publish it just a few weeks ago, and I'm scrambling to get my ducks in a row to make it happen. Major stress. Especially because I'm learning as I'm going, and making mistakes. Now I have an other manuscript to format and comb over, as they want it in a timely manner even though it won't be scheduled for release until 2014, (sigh). Also, my current WIP sucks and needs major revision if I'm to have pages to take to my weekly critique group.

Tip for all of those authors out there that are anticipating that ever-important phone call and want to savor its long-awaited sweetness: don't answer the phone when you are stressed. Let them call you back another day.

I'd love to hear stories of  when other writers got that call. Whether it was to you, or an author friend of yours, what was it like?

(The picture shone won't be the cover of the book, but it's one that the gentleman I interviewed for my story gave me to learn more about the Hitler Youth).
Posted by Carolyn Twede Frank at 5:43 AM